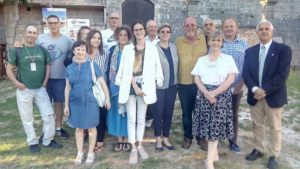 The “international pljočke festival” has been held for the fourth time from 13th to 15th June 2019  in Svetivinčent, Croatia. It was organized by the IPS, and for the first time it was patronized by the UNESCO  Office in Croatia. The first day was about the work with schools and cooperation on projects concerning traditional games and sports. In the afternon there was a scientific conference named THE UNESCO REGISTER OF GOOD PRACTICES IN THE SAFEGUARDING OF THE TRADITIONAL GAMES AND SPORTS, organized with the expert assistance of the Ethnographic Museum of Istria, with which the IPS has been cooperating from the very beginning of its activity.

The first part of the meeting was led by Tamara Nikolić Đerić, a curator-cultural anthropologist and UNESCO facilitator. The presented works were by dr. Valentina Lapiccirella Zingari, from Sienna University, Italy: Understanding the role of communities and civil society organisations in the process of heritage-making. Reflection on the uses of the Register of Good Practices, taking into account the case of Tocatì: looking for models and inspiring experiences in the spirit of the Convention, by dr.sc. Mirela Hrovatin, from the Croatian Ministry of Culture: Purpose and consequences of the protection of Intangible Cultural Heritage: UNESCO lists and Croatian National Register, by dr.sc. Jasenka Kranjčević from the Tourism Institute in Zagreb done with dr.sc. Ksenija Tokić: Horse knight games – between UNESCO and oblivion and by dr. Pere Lavega,  AEJeST President: Critical Ideas for Policy Guidelines on Traditional Sports and Games.

The second part of the meeting was called A treasury of the practice of transferring traditional games and sports, led by dr. Lidija Nikočević, Director EMI/MEI from Pazin. The works presented were by Mirjana Margetić, a senior museum educator from the Ethnographic Museum of Istra, Pazin: Researching, recording – traditional games in museum practice, by prof. Tamara Perković, C.H.A.N.G.E (Cultural Heritage Activities and Nutrition in Global Environment) Erasmus + a Project of five European countries dealing with the preservation of intangible cultural heritage, by prof. Severka Verbanac, from kindergarten in Medulin: Development of the identity and competency of the child in the process of introducing the intangible cultural heritage of the  Municipality of Medulin through the project “Traces in the Sea” (Tales of sunken ships along the coast of Istria), and by prof. Victor Baroja and Benlliure from the VIC University, Catalonia: The recovery of traditional game in Catalonia.

The meeting has shown a significant interest that Croatia has in projects for the conservation and documentation of traditional games and sports from different points of view. The works presented at the conference will be published in a book, collection of works.

On the second day of the Festival, a pljočke tournament was held. There were 34 teams from Croatia, Bosnia and Hercegovina, Monte Negro, Italy, Slovenia and Spain.