by Biel Pubill Soler in UNESCO 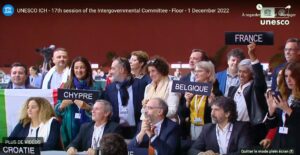 The Tocatì festival become world cultural heritage. The candidacy of the festival of traditional games and sports was supported by several countries (Croatia, Belgium, France, Cyprus)and was positively evaluated during the 17th session of the Intangible Cultural Heritage Committee of Unesco in Rabat, Morocco.

On December 1st, 2022, with the TOCATI festival, Italy obtained its first entry in the Register of Good Practices of the Convention for the Safeguarding of the Intangible Cultural Heritage of Unesco.

The proclamation took place in the presence of Ambassador Massimo Riccardo, Italian representative to UNESCO, who expressed his great satisfaction. In fact, many representatives of organizations (Italians, European and world) could have accompanied the delegation because without all these organizations, small or large, there is no festival.

The Minister of Culture, Gennaro Sangiuliano, said that “This objective has been achieved thanks to teamwork, with the technical-scientific coordination of the Ministry of Culture and with the collaboration of the Ministry of Foreign Affairs and International Cooperation, the Veneto Region, the Municipality of Verona, the Italian Permanent Representation to Unesco, the Italian National Commission for Unesco and the Aga (Association of Ancient Games). The safeguarding program combines policies for the enhancement intangible cultural heritage with integrated actions of sustainable development and cooperation, placing exchange and intergenerational dialogue at the center of the project as values ​​of the traditions of peoples and cultures”.

“From Verona to Rabat, we did a long way to realize this dream – added the President of the Veneto Region Luca Zaia – Tocatì today becomes the representative of a good practice of humanity. Faced with a globalized world in frenetic times, the festival is the expression of a living heritage and a playful dimension with strong traditional connotations. Born and developed in the squares and alleys of the historic center of Verona, Tocatì is the symbiosis between History and Play, which together give life to a moment of social and cultural belonging. For Veneto, it is a wealth of knowledge, in the same way as squares, monuments and landscapes, testimony to cultural diversity … / … The Region recognizes this wealth which constitutes a heritage to be defended and consolidated at the same time. Tocatì cannot be seen as a simple date with traditional games, but it is a moment that aims to safeguard the intangible cultural heritage that belongs to many international communities. A perfect union between traditions and identity which enrich the capital of knowledge and values ​​that we absolutely want to pass on to future generations”.

It is a pride – said Tommasi, the Mayor of Verona – to be, like Italy and like Verona, the leader of the first festival recognized for its good practices for the protection of the immaterial heritage of Unesco. It is an experience that was born from working-class neighborhoods and of which the city has been proud for many years. I think it’s a fair reward for those who have committed so far. …/… From today, the Tocatì Festival certainly has an even greater responsibility, that of representing traditional games and sports and above all of giving cities the possibility of experiencing spaces in a new and shared way, by involving families, adolescents, children and adults around elements of traditional sociability”.